Rotten boats on the sea: 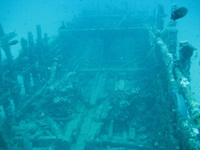 Sea algae as large as bushes brought boats to a halt and in some cases prevented them from sailing onwards. A sea without wind and plagued with obstacles slowed down the advances of ships. As soon as the ships were immobilised by the algae and with the absence of wind it did not take long for the ships to be covered in mollusks, algae and other sea life making navigation even more difficult.

Because the ships were made from woo, they ran the risk of being attacked by the dreaded boring worm. These small worms pierced the hull with infinite tiny holes causing it to rot quickly. As the shipping routes got busier many half-rotten boats were found with skeleton crews. Many men died of hunger and thirst after being trapped in the dreaded Sargassum.