The Saragasso Sea: The Sea of Fear and Lost Ships 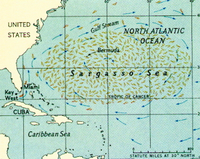 This sea can be found at the northern point of the Bermuda Triangle and owes its name to the Sargassum seaweed and often calm blue water.

Chronicles from early navigators such as the Phoenicians and Carthaginians tell of the running into the large floating seaweed. The Spanish suffered them for 500 years. According to historical records, it is said that when Christopher Columbus encountered it, he surmised that land could not be far away and soon after he discovered America.